A two –month renovation project has concluded, and The Dunes Golf and Beach Club is reopening with new greens and 175 yards of added length.

The course’s A1 bent grass greens have been converted to the more heat tolerant Champion Bermuda-grass, and the Robert Trent Jones layout has been stretched to 7,370 yards, with all but 30 of the extra yards added to the front nine.

The changes are generally part of a master plan drawn up in 2003 by heralded course designer Rees Jones for his father’s layout, which opened in 1948.  Jones revisited his master plan in January, and while it was closed to check on the changes, the last visit coming on Aug. 1.

“I think we just followed the footsteps of what my father did originally back in 1948, and we’re adding a little bit of length here and there because the ball is going farther and making the holes play pretty much the same way my father designed them,” Jones said.  “Dad had the elasticity on this course.”

“I think The Dunes Club has always been a standard for golf in the south,” Jones said.  “It’s a wonderful place to visit.  When you come here you want to come back…I love this place.” 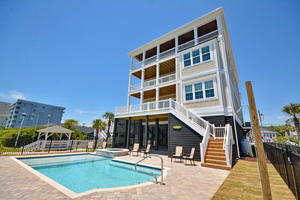