A group of golfers from Pennsylvania returned to the Grand Strand for its 45th straight year this week.  Ron Bingeman, Everett Cassel, and Larry Spangler having been making their annual golf trip to Myrtle Beach since 1970.  One of their original foursome, Bob Hayes had to end his journey after 20 years and was replaced with Craig Aiken, who has been making the trip for the past 25 years.

All of the golfers are married and they state that having understanding wives is important to their annual pilgrimage.  They also went on to say that as they have gotten older their wives are happy to get rid of them for a week.  Cassel, Bingeman and Spangler are all in their 70’s while Aiken is 58.

While many golf groups that come to the Grand Strand are much larger groups, Bingeman said “the reason we got to 45 years is by keeping it simple.  It’s easy to organize.”

The group planned to play 45 different holes at Barefoot Resort to commemorate 45 years and the three founding members are scheduled to play their 10,000 Grand Strand hole at the Dunes Golf and Beach Club.

This week will complete 388 days of golf packages for the group.  The trips that they book are usually at least a full week, and they played 36 holes on many of their days.

The group’s original trip was for four days.  “We came for four days just to see what it was like, then we were mad going home that we hadn’t gone for the week,” Cassel said.  “We planned on coming back every year as soon as we saw it.  The people were so friendly, the price was great and you had a choice of restaurants.”

The group has kept every scorecard.  When they first began their trips there were only 10 golf courses for them to choose from.  As the Grand Strand began to add golf courses it added incentive fot hem to return.

It is quite incredible that the group has lost only three days of golf due to rain in 45 years.  They did however have to push their trip back one week in 1989 due to Hurricane Hugo.

The group has made many friends with the people throughout the local golf industry, and annually meets with longtime area pro Gene Weldon for dinners.  Weldon also visits with them ion Pennsylvania.  They first met while waiting out a frost delay when Weldon was the pro at Waterway Hills in North Myrtle Beach.

Congratulations to this group for their accomplishment and we hope to see them for many years to come. 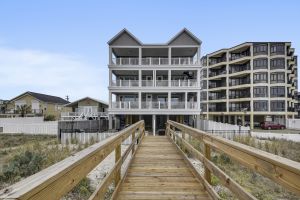