After 25 years Bobby Smith and his family have decided that it is time.  The Smith family is selling Golf Dimensions.  Golf Dimensions has been a golfer’s retail paradise for 25 years.  The sale includes three store locations in Myrtle Beach and North Myrtle Beach.  Golfsmith International based out of Austin, Texas is the world’s largest golf retailer and it opened its first Strand store last May.

“It’s a dream come true to start a business from ground zero,” Bobby Smith said.  “We are blessed, we were fortunate, and we worked hard.  We’ve reached that pinnacle now that we can step aside.  The success we’ve built here, it has attracted the largest golf retailer in the U.S. to come in and take over and run with it.  It speaks volumes to us to what we’ve accomplished.”

An 80,000-square foot Golf Dimensions store at George Bishop Parkway and U.S. 501 that was being used as storage, and some adjacent property is closing and will not be part of the sale.

Golfsmith International plans to remodel the large North Myrtle Beach building through the summer while remaining open to create a Golfsmith Xtreme store, similar to the one that exists at the corner of U.S. 501 and U.S. 17 in Myrtle Beach.  The grand opening celebration is targeted for early October.

Golfsmith stores feature the latest custom-fitting technology and extensive inventory of equipment and merchandise, and the company encourages customers to test products before purchasing them in an interactive hi-tech environment.  The Myrtle Beach store location includes a five-bay indoor driving range and five fitting studios.

Golf Dimensions has truly been a family business.  When Bobby’s father, Bob Smith, retired in 1988 from his 33-year position as a senior financial officer with a paper manufacturer in Richmond, Va., Bobby left his nine-year management position with Circuit City, suggesting they “move to Myrtle Beach and open up a retail store.”

Bob Smith passed away in October 2009 at the age of 78.  Bobby, 56, his wife, Mary, and stepmother, Barbara, have all had significant roles in the business.  Bobby’s sons Chris and Jonathan joined the business after graduating from the University of South Carolina.  “It has truly been a family business where everybody had responsibilities,” said Smith.

Golf Dimensions has been a beneficent corporate community member for the Strand, supporting numerous events and charities in the area.  Among its more high-profile sponsorships, it sponsored the Senior Tour Championship for seven years at nearly $100,000 per year, Myrtle Beach World Amateur Handicap Championship for 15 years and the National Father & Son Team Classic for three years.  Smith said the family has given “millions back to the community.”

“That’s part of the reward of running a successful business is being able to help people,” he said.

Good luck to Golfsmith and the Smith family.  Hopefully this will give the Smiths a chance to finally get out and play a little golf. 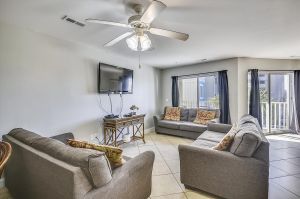