It was a wild weekend for golf at the 2021 PGA Championship played at the Ocean Course in Kiawah Island Resort. Perhaps the most unlikely outcome came to fruition with the 50-year-old Phil Mickelson lifting the trophy late Sunday afternoon. The 6-time major champion finished the weekend off with a tournament-best score of 6 under par. The win over the weekend was a record-breaking win, making Mickelson the oldest player in PGA history to win a major tournament. Phil finished his final round on Sunday with 3 birdies and 3 bogeys, finishing with a round score of 1 over par. Coming in tied for second place was one of golf's favorite personalities, Brooks Koepka. Koepka played a strong tournament throughout the weekend but just came up short by 2 strokes on the final round. At the end of the day, he mentioned that he was struggling reading some of the putts and that the wind had played a much larger factor than he thought it would.

There was a little bit of drama during Koepka's post-round interview on Sunday. The rivalry between him and Bryson Dechambeau was stoked when Bryson walked behind the camera sporting metal spikes and interrupting the interview. You can clearly see the annoyed look on Brooks' face as he loses his train of thought on the question and has to restart the interview.

Brooks Koepka annoyed by Bryson Dechambeau during an interview This will be an interesting storyline to watch as the U.S. Open kicks off in just one month's time. Pairing these two guys in a featured group would definitely get more eyes on the game of golf and give fans a great look into the sport's biggest rivalry.

All in all, Ocean Course at Kiawah Island Golf Resort will soon be remembered as giving us an all-time classic PGA Championship round of golf. Records were broken, the drama was stirred, and the fans were out in full force for a remarkable weekend of golf. 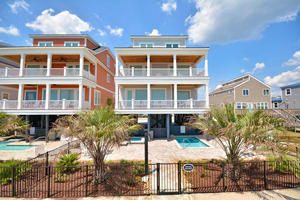