Some say golf gave Arnold Palmer everything. While that may be true, Mr. Palmer gave golf and even the people who don’t play or follow the game so much more. He gave a part of his life to every person he signed an autograph for and every fan he shook hands with. He loved the game that he played but he loved people even more.

Arnie made the fans feel important – a lesson that Phil Mickelson learned from him over the years. Palmer always believed: Never walk past anybody. "He always made eye contact and acknowledged they were there," Mickelson said. "We all try, but we never live up to his standard. He made the difficult look easy." His signature is among the most famous in sports. Everyone can read it, each letter just as legible as the "A'' and the "P." One year in his office at Bay Hill, Palmer reached for a black pen and a blank sheet of paper to show how he learned to write. He even remembered the name of his teacher in the first grade, Rita Taylor, and the "Palmer Method of Writing" that was scrawled on the blackboard. That's how kids in the 1930s learned to write. The method wasn't named after Palmer. He just perfected it.

An avid pilot for over 50 years, Palmer would pilot a plane for the last time on January 31, 2011. He flew from Palm Springs, California, to Orlando, Florida, in his Cessna Citation X. His pilot's medical certificate expired that day and he chose not to renew it. Arnold Palmer Regional Airport in Latrobe, Pennsylvania, is named for him. There is a statue of Palmer holding a golf club in front of the airport's entrance, unveiled in 2007. Palmer's early "fear of flying" was what led him to pursue his airman certificate. After almost 55 years, he logged nearly 20,000 hours of flight time in various aircraft.

Palmer is also known for his contributions to the Arnold Palmer Hospital. Arnold and his late wife Winnie Palmer were first introduced to the hospital through an invitation to tour the newly opened neonatal intensive care unit and pediatrics wing of Orlando Regional Medical Center in the mid-1980s. According to the Arnold Palmer Hospital website, the conditions of the facility as well as the talented, ambitious, and dedicated staff made quite the impact on Palmer. He was said to have made the comment: “We can do better than this — we should do better than this — for the children of our community.” After lending his name to the facility to help bring awareness and raise money needed to build a hospital in the Orlando, Florida area, Palmer challenged the hospital to always strive to be the very best. He added that the "good would never be good enough."

It’s not just Palmer's record as one of the all-time greats, nor is it his influence on multiple generations in the game. His legacy is bigger than golf. Bigger, than the hospitals in his name and the drink that will endure long after he was finally proven to be mortal. His legacy, even now that he is gone, is something that will be almost impossible to match.

Myrtle Beach golf is lucky to have the following courses that were designed by the late, great Arnold Palmer. Add one or all 4 of these to your Myrtle Beach golf package and remember “the King”.

King's North at Myrtle Beach National
Since opening in 1973, King's North has grown into one of the area’s bedrock courses. The layout underwent a redesign in 1996 and has since been ranked among America’s 100 Greatest Public Courses by Golf Digest. With its trademark sand traps, King’s North is one of the Grand Strand’s most popular and memorable courses. Just mention “The Gambler” to knowledgeable Myrtle Beach golfers and they know you are referring to the famed sixth hole. This Palmer design is a classic for your next Myrtle Beach golf package

Rivers Edge
Palmer’s final design in the Myrtle Beach area, Rivers Edge opened to national acclaim in 1999 and has also been ranked among America’s 100 Greatest Public Courses. Built along the Shallotte River, the layout is among the Grand Strand's most scenic and the 9th hole is one of the most talked about. The par 5 requires golfers to carry the marsh twice and plays into a peninsula green. It’s a stunning hole and course, be sure to add this one to your Myrtle Beach golf package. 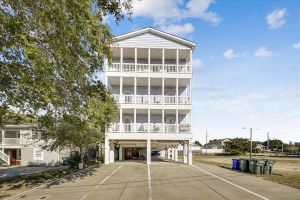